The Four Seasons (Italian: Le quattro stagioni) is a set of four violin concertos by Antonio Vivaldi. Composed in 1725, The Four Seasons is Vivaldi’s best-known work, and is among the most popular pieces in the classical music repertoire. The texture of each concerto is varied, each resembling its respective season. For example, “Winter” is peppered with silvery pizzicato notes from the high strings, calling to mind icy rain, whereas “Summer” evokes a thunderstorm in its final movement, which is why the movement is often called “Storm” (as noted in the list of derivative works).

The concertos were first published in 1725 as part of a set of twelve concerti, Vivaldi’s Op. 8, entitled Il cimento dell’armonia e dell’inventione (The Contest Between Harmony and Invention). Vivaldi dedicated their publication to a Bohemian patron, Count Václav Morzin (of Vrchlabí 1676–1737), and in so mentioned the count’s longstanding regard for these four, in particular (which had apparently been performed with the nobleman’s orchestra, in Prague’s Morzin Palace)—although his dedication may have been closely related to the completion of an Augustinian monastery that year, where Vivaldi, a priest himself, refers to Morzin, the church’s dedicator, as “Chamberlain and Counsellor to His Majesty, the Catholic Emperor”—while (as Maestro di Musica in Italy) Vivaldi presents them anew, with sonnets or enhancements for clear interpretation. The first four concertos are designated Le quattro stagioni, each being named after a season. Each one is in three movements, with a slow movement between two faster ones (and these movements likewise vary in tempo amid the seasons as a whole). At the time of writing The Four Seasons, the modern solo form of the concerto had not yet been defined (typically a solo instrument and accompanying orchestra)[citation needed]. Vivaldi’s original arrangement for solo violin with string quartet and basso continuo helped to define the form of the concerto.

There is some debate as to whether the four concertos were written to accompany four sonnets or vice versa. Though it is not known who wrote these sonnets, there is a theory that Vivaldi wrote them himself, given that each sonnet is broken down into three sections, neatly corresponding to a movement in the concerto. Whoever wrote the sonnets, The Four Seasons may be classified as program music, instrumental music that intends to evoke something extra-musical and an art form which Vivaldi was determined to prove sophisticated enough to be taken seriously.

Use the link below to listen to recordings of the Four Seasons:
http://en.wikipedia.org/wiki/The_Four_Seasons_(Vivaldi)#Recordings

The first recording of The Four Seasons is a matter of some dispute. There is a compact disc of one made by the violinist Alfredo Campoli which is taken from acetates of a French radio broadcast; these are thought to date from early in 1939. The first proper electrical recording was made in 1942 by Bernardino Molinari, and though his adaptation is somewhat different from what we have come to expect from modern performances, it is clearly recognisable. This first recording by Molinari was made for Cetra, issued in Italy and subsequently in the United States on six double-sided 78s in the 1940s. It was then reissued on long-playing album in 1950, and was once again reissued on compact disc.

Not surprisingly, further recordings followed. The next was in 1948 by the violinist Louis Kaufman, mistakenly credited as the ‘first’ recording, made during the night in New York using ‘dead’ studio time and under pressure from a forthcoming musicians strike.[citation needed] The performers were The Concert Hall Chamber Orchestra under Henry Swoboda, Edith Weiss-Mann (harpsichord) and Edouard Nies-Berger (organ). This recording helped the re-popularisation of Vivaldi’s music in the mainstream repertoire of Europe and America following on the work done by Molinari and others in Italy. It won the French Grand Prix du Disque in 1950, was elected to the Grammy Hall of Fame in 2002, and in 2003 was selected for the National Recording Registry in the Library of Congress. Kaufman, intrigued to learn that the four concertos were in fact part of a set of twelve, set about finding a full score and eventually recorded the other eight concertos in Zürich in 1950, making his the first recording of Vivaldi’s complete Op. 8.

I Musici followed in 1955 with the first of several recordings of The Four Seasons with different soloists. The 1955 set with Felix Ayo was that ensemble’s first recording of any music; subsequent I Musici recordings feature Felix Ayo again in 1959, Roberto Michelucci in 1969, Pina Carmirelli in 1982, Federico Agostini in 1990, and Mariana Sîrbu in 1995. The 1969 recording by the Academy of St. Martin-in-the-Fields conducted by Neville Marriner, featuring soloist Alan Loveday, reputedly moved the piece from the realm of esoterica to that of program and popular staple.

Nigel Kennedy’s 1989 recording of The Four Seasons with the English Chamber Orchestra sold over two million copies, becoming one of the best-selling classical works ever.[11]Gil Shaham and the Orpheus Chamber Orchestra recorded The Four Seasons as well as a music video for the first movement of “Winter” that was featured regularly on The Weather Channel in the mid-1990s.

The World’s Encyclopedia of Recorded Music in 1952 cites only two recordings of The Four Seasons – by Molinari and Kaufman. By 2011 approximately 1,000 different recorded versions have been made since Campoli’s in 1939.[citation needed]

Commensurably, it has become an aspect of these recordings for classical musicians to distinguish their version of The Four Seasons from others’, with historically informed performances, and embellishments, to the point of varying the instruments and tempi, or playing notes differently from the listener’s expectation (whether specified by the composer or not). It is said that Vivaldi’s work presents such opportunities for improvisation.

Derivative works of these concerti include arrangements, transcriptions, covers, remixes, samples, and parodies in music—themes in theater and opera, soundtracks in films (or video games), and choreography in ballet (along with contemporary dance, figure skating, rhythmic gymnastics, synchronized swimming, etc.)—either in their entirety, single movements, or medleys. Antonio Vivaldi appears to have started this trend of adapting music from The Four Seasons, and since then it has expanded into many aspects of the performing arts (as have other instrumental & vocal works by the composer). This contest between harmony and invention (as it were) now involves various genres around the world: 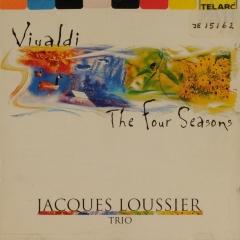 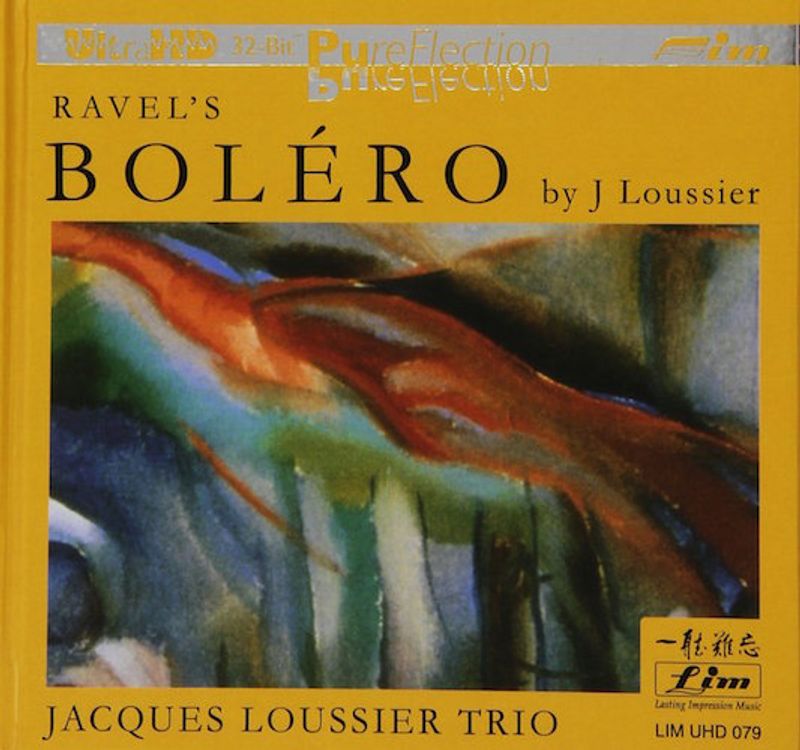 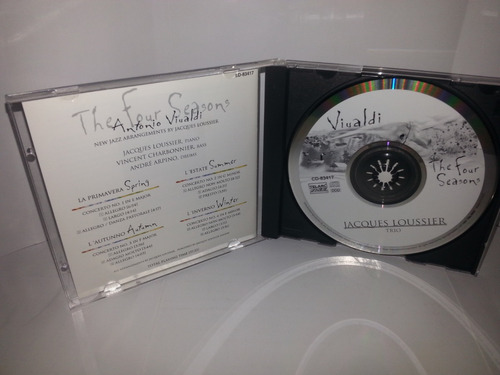 Pianist Jacques Loussier has certainly had an unusual career, much of it spent performing jazz interpretations of Bach's music. While his original works have been noteworthy, Loussier's most famous projects have been his transformations of Bach's music. In 1997 he tackled Vivaldi's Four Seasons, four concertos that he performed and recorded with his trio. As with Bach's pieces, Loussier pays respect to Vivaldi's melodies and the development of the works while swinging the music. He divides each of the concertos into three parts, improvises tastefully while keeping the themes in mind, and leads his trio through some uncharted territory. Loussier occasionally recalls the style of John Lewis and 'Allegro Non Molto' from the 'Summer' piece has some resemblances to Lewis' 'Django.' Due to Loussier's impressive technique, respect for both idioms and his well thought-out concept, this unique set is a complete success.