Last week, a mob of white protesters swarmed a white woman eating dinner in the Adams Morgan neighborhood of Washington, D.C. Video of the bullies demanding that patrons raise their fists in solidarity with the movement went viral.

Many pro-Trump and right-wing media personalities were quick to insist this verbal assault was emblematic of the entire Democratic Party and the broader “American left.” Never mind that the victim, Lauren B. Victor, was a fellow progressive who told a Washington Post reporter, “I’m very much with them. I’ve been marching with them for weeks and weeks and weeks.”

Among the funny things about this decidedly unfunny event is that it would have been almost impossible for this roving rhetorical goon squad to find the kind of victims they surely wanted. Adams Morgan is an especially liberal neighborhood in a very liberal city. Sure, there are some conservatives there — I lived in Adams Morgan for over a decade — but picking on random white people in Adams Morgan in the hope of finding MAGA types is like scouring Manhattan’s Upper West Side for taxidermists. It’s theoretically possible to find one, but you’ll have your work cut out for you.

Regardless, Democrats would be well-advised to draw inspiration from Victor’s refusal to be bullied by a mob, even one she sympathizes with, because she is surely more representative of voters than the mob accosting her was. 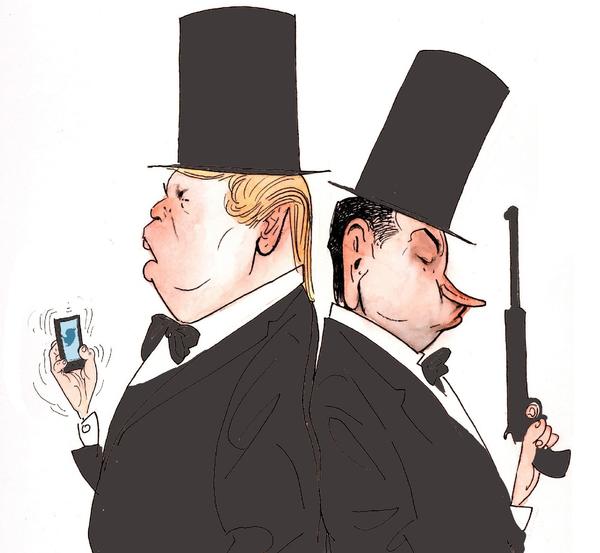 American liberalism’s Achilles’ heel has long been a reluctance, sometimes a flat-out inability, to criticize radicals to their left. In the 1960s, leading Democrats kowtowed to extremists out of what historian Fred Siegel called a “riot ideology,” and it cost the party dearly.

There have been exceptions. Americans for Democratic Action arguably saved the Democratic Party from its leftmost wing led by the “useful idiot” Henry Wallace, FDR’s former vice president. Bill Clinton broke the GOP’s monopoly on the presidency by deliberately picking fights with the left in order to attract more moderate voters. Clinton’s tactics were arguably more cynical than idealistic — he took time off from the campaign trail to oversee the execution of a severely brain-damaged Black man. But say what you will about his “triangulation,” it worked.

American politics has become a contest between two competing caricatures of reality. The primary driver of this dynamic has been the media’s — particularly cable news’ — addiction to narrative journalism combined with the pernicious influence of social media. Twitter and Facebook make it all too easy to shine a spotlight on outlier events and present them as central to our lives. The focus on the ludicrous “autonomous zone” in Seattle earlier this summer let the right claim the whole city was like a “Mad Max” movie.

Similarly, the statistically rare (I’m sorry, but it’s true) examples of outrageously bad behavior by some cops captured on video give many on the left permission to push a narrative of wholesale racial oppression by police.

Social media is like the wall on Plato’s Cave. Selective facts cast shadows we mistake for reality. If you take all your cues about what’s happening in America from partisan Twitter, as so many journalists do, you’d be a fool not to buy a gun and prepare for the coming apocalyptic helter-skelter.

The problem is intensified by the tendency of the hyper-politically engaged left and right to listen only to people in their own echo chamber and to mistake Twitter outrage for sentiment on the ground. So despite the fact that a majority of Black and Latino people want the same amount or more police in their communities, we spent weeks listening to “experts” claim that “abolish the police” is a reasonable, mainstream position. (Here’s an illustrative heuristic: If you hear politicians or journalists using the label “Latinx” to describe Latinos, you’re listening to someone in a bubble. According to recent Pew Research Center polling, only about 25 percent of Latinos know the term and only about 3 percent actually use it.

Joe Biden won the Democratic nomination largely because most of his competitors talked as if primary voters were indistinguishable from the very online left-wing activists and journalists who dominate MSNBC and CNN.

To his credit, Biden has unequivocally condemned rioting, vigilantism and street violence. But he took too much time to do it, not because he doesn’t believe what he said, but because the campaign let the fringe define the center of the party. Condemning violence — by rioters and vigilantes alike — is a no-brainer; it’s a pre-partisan patriotic requirement of political leadership.

Hesitation to do so is not merely shameful, it’s political malpractice, because most voters expect it and even the appearance of reluctance feeds precisely the narrative that could cost Biden the election.

(Jonah Goldberg is editor-in-chief of The Dispatch and the host of The Remnant podcast. His Twitter handle is @JonahDispatch.)