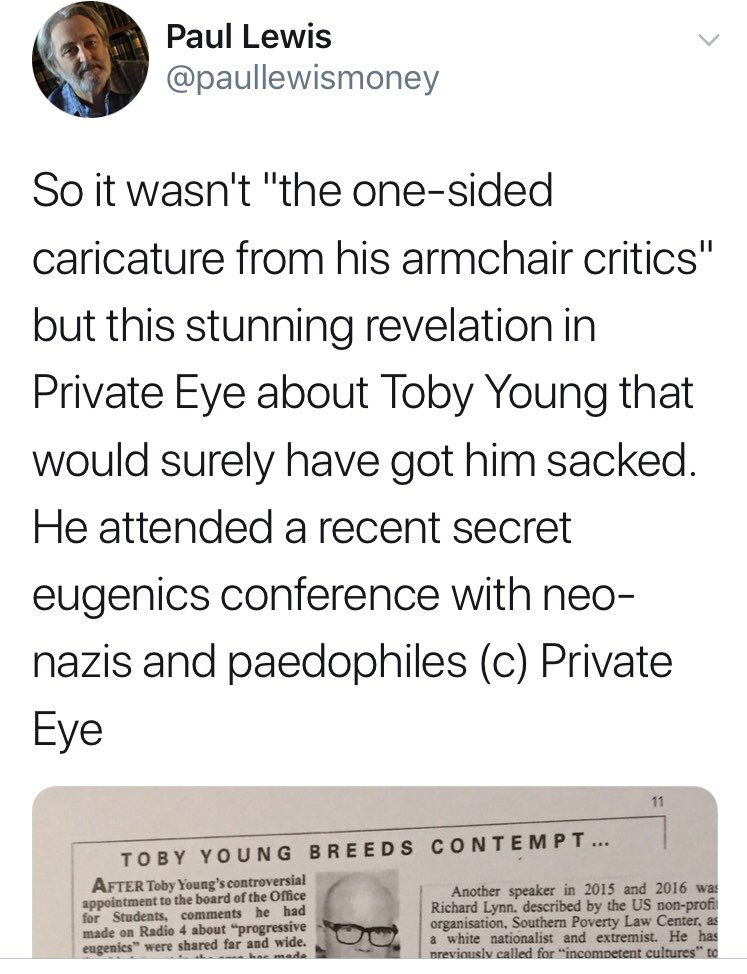 Toby Daniel Moorsom Young (1963–) is a right-wingBritishjournalist, author, and former director of several educational institutions. He is known for supporting eugenics, making homophobic and misogynistic comments on Twitter, and for admitting to being high on cocaine in a London club.

In January 2018 Toby was controversially appointed to the post of non-executive director on the board of the Office for Students.[1] He resigned slightly over a week later after significant public pressure over his large number of misogynistic and homophobic tweets.[2][3][4][5][6][7][8][9] 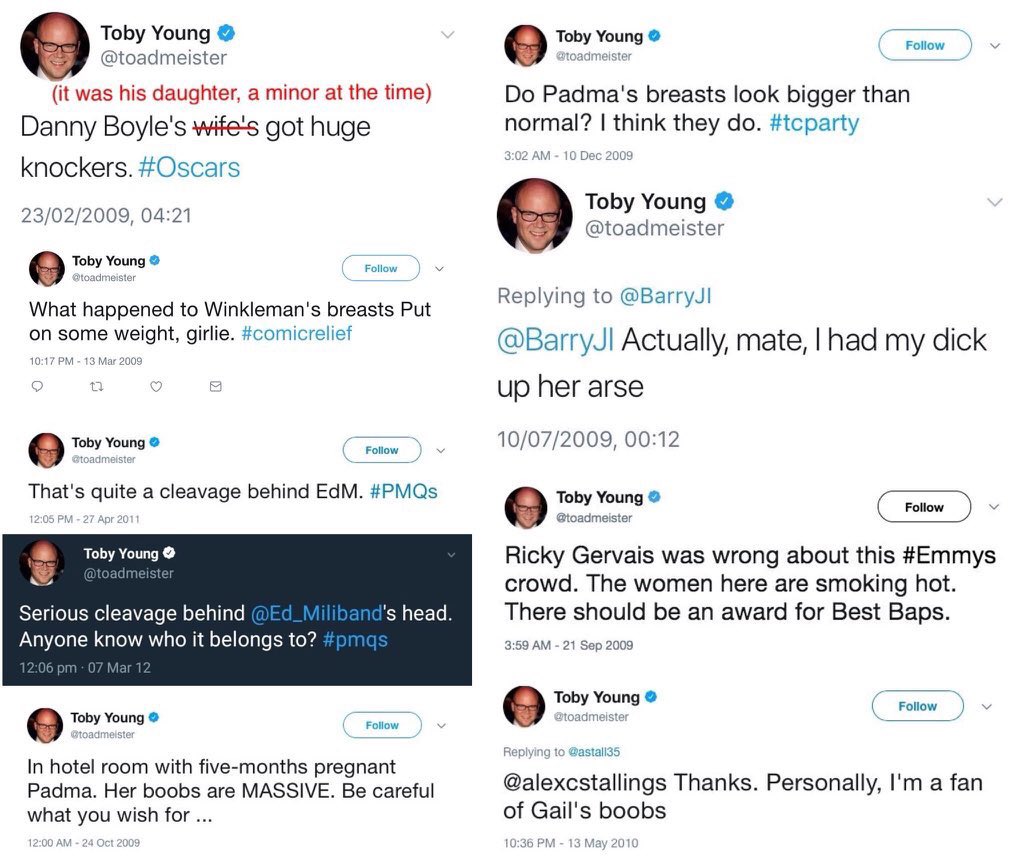 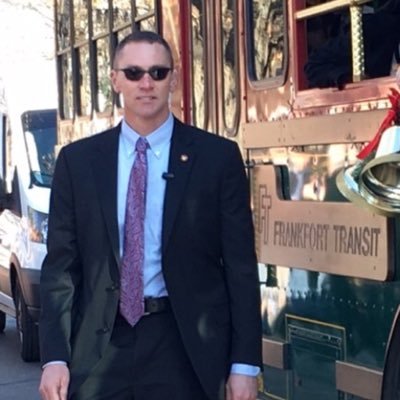 In 2015, Young wrote an article for the Australian magazine Quadrant entitled 'The fall of meritocracy'. In it he advocated what he termed 'progressive eugenics'. Young proposed that when the technology for genetically engineered intelligence is practical it should be allowable for a decision to be made by poor parents with low IQs over which embryos should be allowed to develop using intelligence as a marker. 'It could help to address the problem of flat-lining inter-generational social mobility', he wrote.[10][11]

In January 2018, Private Eye[12] and the London Student[13] revealed that Young attended the London Conference on Intelligence at University College London (UCL) in 2017, which was described by the media and a number of politicians as a 'secret eugenics conference'.[14] The conference was convened by Honorary UCL professor James Thompson, and included speakers such as Richard Lynn.[15]

In 2001 Toby admitted to haven taken cocaine at the Groucho Club in central London[16] in 1997, as well as supplying drugs to others. As such activities are against the Club rules he was subsequently expelled in late 2001 after writing about the cocaine use of his friends whom he had supplied with the drug during a photo shoot for Vanity Fair.[17]

In March 2020 he wrote an article in The Critic on COVID-19 that was condemned.[18] In the article he wrote:

Like a growing number of people, I’m beginning to suspect the Government has overreacted to the coronavirus crisis. I’m not talking about the cost to our liberty, although that’s worrying, but the economic cost.

Even if we accept the statistical modelling of Dr Neil Ferguson’s team at Imperial College, which I’ll come to in a minute, spending £350 billion to prolong the lives of a few hundred thousand mostly elderly people is an irresponsible use of taxpayer’s money.[18]

I daresay most sentient beings believe Toby Young is heartless, waste of space. So you do wonder why he feels it necessary to keep proving it.[18]

In normal times the far right eugenicist views of people like Toby Young are just shameful and embarrassing. During a pandemic they can be outright deadly.[18]

In the article, Young argued for ending the lockdown before April 14 2020, a view similar to one espoused by Donald Trump.[18]

Critics had suggested that Young would change his mind if he contracted COVID-19, to which he said he thought he'd already had it, adding:

If the Government does end the lockdown, and it turns out that by the time I require critical care the NHS cannot accommodate me, I won’t regret writing this.[18]

Toby Young to bring back the spirit of 1945. Toby Young is the son of the late great Michael Young[a,b], author of the 1945 Labour Party manifesto, the Rise of the Meritocracy, founder of the Open University, the Consumers Association, etc. [], May.15.2009http://www.nextleft.org/2009/05/toby-young-to-bring-back-spirit-of-1945.html Next Left 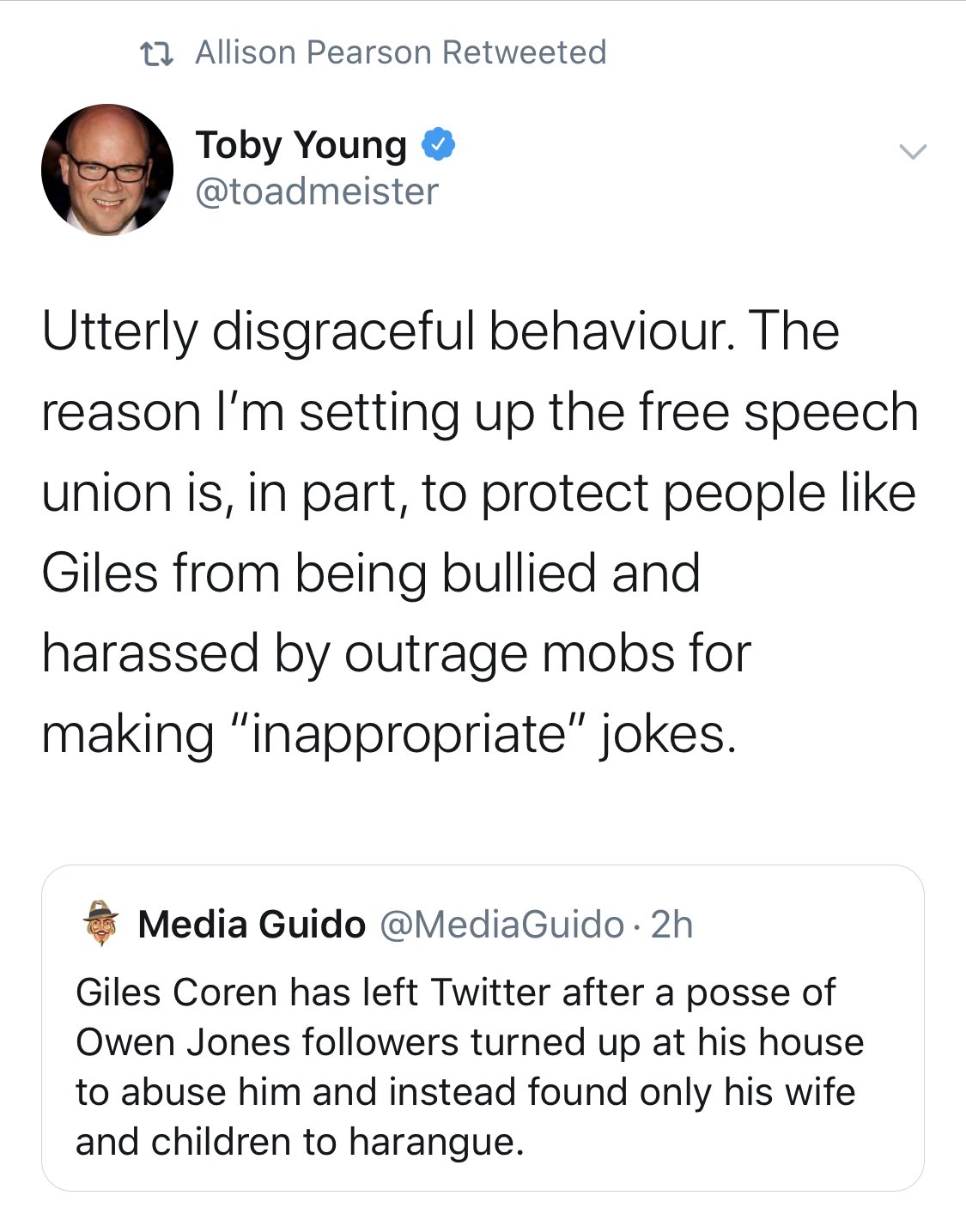