Tomi Lahren Went On Conspiracy-Fueled Twitter Rant Over Georgia Runoff Election Results January 6, 2021, 10:41 am While much of Twitter celebrated the apparent Democratic victories in Georgia’s. — Tomi Lahren (@TomiLahren) January 7, 2021 “What happened yesterday is not our President’s legacy,” she wrote on Twitter. “I am very disappointed in what occurred & disgusted with the Trump supporters (plus leftist agitators) who stained the movement.”.

While there’s been much rejoicing over the guilty verdict for Derek Chauvin, convicted of murdering George Floyd just under a year ago. But not everyone’s in a good mood. Conservative commentators were quick to spout inventively offensive remarks. Greg Gutfeld got schooled by his own Fox News colleagues after he confessed he was mostly happy, but only because it meant his neighborhood wouldn’t be overrun with protesters. Ben Shapiro said something dumb. As did, alas, Nancy Pelosi. And, of course, so did Tomi Lahren.

You got your justice so I’d assume there will be peace in Minneapolis tonight? No rioting? No looting? No harassing officers?

Is the Foot Locker safe tonight? Should be, right? Justice, right? No need to steal in the name of George Floyd anymore, right?

“You got your justice so I’d assume there will be peace in Minneapolis tonight? No rioting? No looting? No harassing officers?” Lahren tweeted at people who were almost certainly not going to protest against a verdict they see as just. But she wasn’t done. “Is the Foot Locker safe tonight? Should be, right? Justice, right? No need to steal in the name of George Floyd anymore, right?”

Mind you, the reaction to Chauvin’s verdict has been jubilant, if bittersweet: Real justice, as many have pointed out, would have been George Floyd walking away from the ordeal alive. Moreover, it was the months of protests, often with violent pushback by police, that turned the murder of Floyd into something that could actually affect real change.

But Lahren wasn’t having that. And people weren’t having Lahren’s comments. They wondered who “you” was referring to, exactly. They wondered why she chose Foot Locker. Actually, they didn’t have to wonder very hard; they knew the answer.

My justice? It’s just “justice” you racist twazzle. Did you think it was a good thing he murdered a man? Damn, I’ll never get the brutality and heinous, callous, vile, hatred you spew Tammy, you really are a POS. Hey, but on @FOX, that pays the bills. Work it. https://t.co/ULXQFmqHGJ

One of the countless problems with racist xenophobes like this moron is that a black man, face down on the pavement with a knee on his neck, is precisely her idea of “peace.” https://t.co/jc2Op4xvh6

The epitome of white privilege. https://t.co/0hmOFJTLds

“YOU got YOUR justice…”

Y’all see that loaded fucking language? Who is this YOU you’re talking about Tammy? Say it with your whole chest since you’re so bold. https://t.co/3jYiWXSy1v

“You blacks” is what you really meant to say. https://t.co/XHnbyoa0u4

Some simply bashed her.

The entire world: JUSTICE IS SERVED!

Others pointed out that she didn’t say anything remotely similar about what happened at the Capitol building on January 6, when there was plenty of rioting and looting and harassment, as well as multiple deaths. 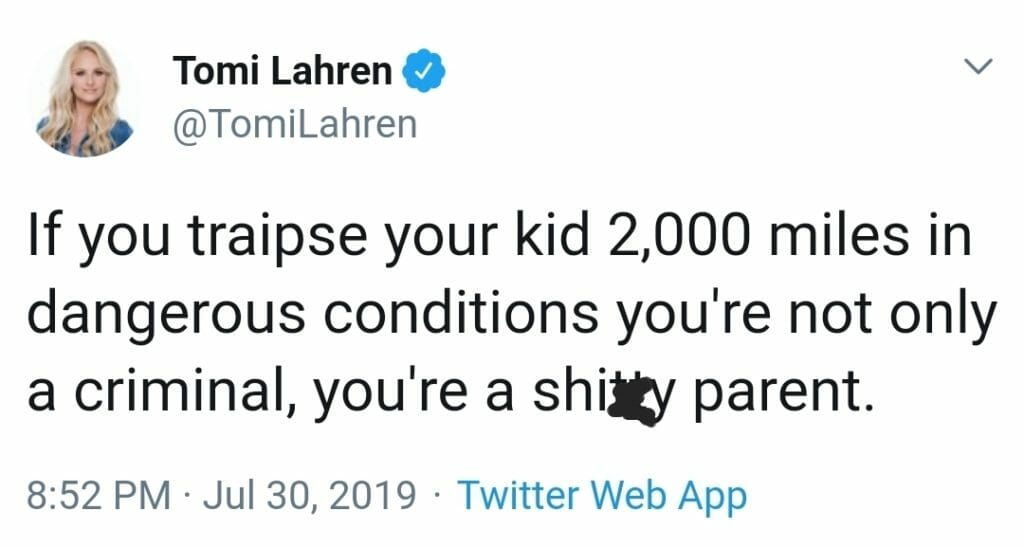 The country wasn’t safe when YOUR PEOPLE, white supremacist domestic terrorists attacked the US Capitol in a twisted attempt to overthrow the government for Putin owned criminal Trump. Killing Capitol policemen. Where was your random tweet then? Take a stadium 🏟 full of seats https://t.co/F0YP2eAm6i

Is the capitol safe tonight..? https://t.co/fWPTzoGtu9

Sometimes, it be your own people. https://t.co/ioza0Msw34pic.twitter.com/1fdWJfnwp8

I thought you LOVED rioting, looting, and harassment of officers 🤡 https://t.co/YWT26ezumWpic.twitter.com/V21syfW27S

Others pointed out some other bad takes she had after the verdict was read.

Tomi thinks that unless a cop yells “I’m killing you because you’re Black,” that it can’t possibly be race-related. https://t.co/ACtyBjMHmE

Some dragged Ben Shapiro (and Nancy Pelosi) into it.

Ben Shapiro and Tomi Lahren being completely ubable to hide their disdain for Black people for even 15 minutes after a cop is convicted of killing one of us is extremely on brand for the white supremacist movements they fuel and profit from. pic.twitter.com/3NcR20j8wv

BEN SHAPIRO: Well, that was a crappy thing I said about the Derek Chauvin verdict

And others had a novel idea: Maybe start ignoring her completely.

It’ll never happen to Ben Shapiro or Tomi Lahren’s family, and we know the part of their brain where empathy should be is broken, so please stop giving them attention. You don’t need to surface the worst responses every time.

I really forget Tomi Lasagna exists until she’s brought back into the timeline because she’s getting outrage engagement. Please block her. She builds her platform off of us, and it’s been time for us to pay her dust. pic.twitter.com/OwM8Wxnu0w

Ben Shapiro & Tomi Lahren trend because they said something stupid & racist about the #verdict. We do give them way too much attention, which I'm guilty of too. People are right to say we should ignore them; they don't debate in good faith or at all because they have an agenda.

Tomi Lahren is just comic relief on a hard Friday like today.

To the pro-eternal shutdown cheerleaders, when your favorite government pals start canceling pride parades, we better not hear a peep out of you!!!

Tomi was unaware that nearly all Pride parades have been canceled. She didn't get the word because the 'pro-eternal (?) shutdown cheerleaders' didn't complain about it. They moved their events online and stayed home. Unlike certain Republican groups.

This travesty has already canceled many important events for many people.
That's on Donald Trump's failures to contain it, to create a testing strategy & to get the PPE out.
Not on governors trying to protect citizens and healthcare workers.
Come volunteer in a NJ hospital.

They've already started cancelling them, but I guess since no one is complaining or making a big deal about it you didn't know. Stop being so hateful all the time.. it's not a good look. They’ve already been cancelled and we didn’t make a big stink about it and protest. We understood it was for the greater good and the health of ourselves and others. A concept you and your other “conservatives” are unfamiliar with. pic.twitter.com/Kidfh4SKVq

.
Tomi has accomplished something, however.