Tune of the Day: Winter: Largo

The Four Seasons Autumn op. 3 Vivaldi, A Antonio Vivaldi's depiction of Autumn, here transcribed for Flute by James Galway and Phillip Moll. But the idea of importing the flute or recorder into The Four Seasons was initiated, at least on records, by James Galway, in 1976 (James Galway & Zagreb Soloists: Vivaldi Four Seasons (RCA Red Seal)), who only substituted the flute to the solo violin – a substitution which has precedents and finds its historical legitimacy with Vivaldi himself, and which was common in the 18th century.

from “The Four Seasons” by Vivaldi

“L'inverno” (“Winter”) is the closing chapter in Vivaldi's The Four Seasons, a cycle of four violin concertos each inspired by an Italian sonnet whose pastoral scenes the composer attempts to describe in the music. Not surprisingly, this Concerto in F minor contains the least exuberant music, and at times even takes on a dark expressive manner.

That said, “Winter” still has its share of bright sounds and happy moods. The second movement in particular, marked Largo, brims with the kind of sweet lyricism that makes the listener long for snow-covered scenery and a warm fireplace. In fact, this lovely singing music depicts people warming themselves by a fire while a cold rain falls outside (in Venice, where Vivaldi lived, winter rarely produces snow), as described in the related sonnet: 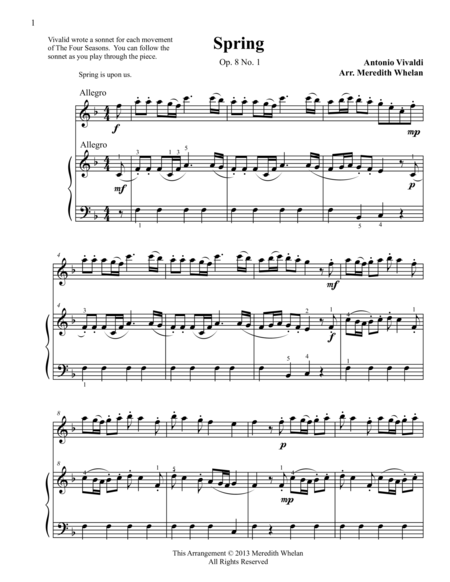 Before the fire to pass peaceful
Contented days while the rain outside pours down.