The Gloria in D is probably one of his best known sacred works, but it also reflects Vivaldi’s other skill as an opera composer, which he regarded as a distraction from his day job at the Pieta. Venice in the early 18th century was the pleasure centre of Europe, and a visit to the opera was part of the court and social life of the city. Philippe Jaroussky turns once again to the poignant meditation on grief that is the Stabat Mater — this time in Vivaldi’s searingly beautiful 1712 setting — along with a selection of the Red Priest’s solo motets and sacred works. 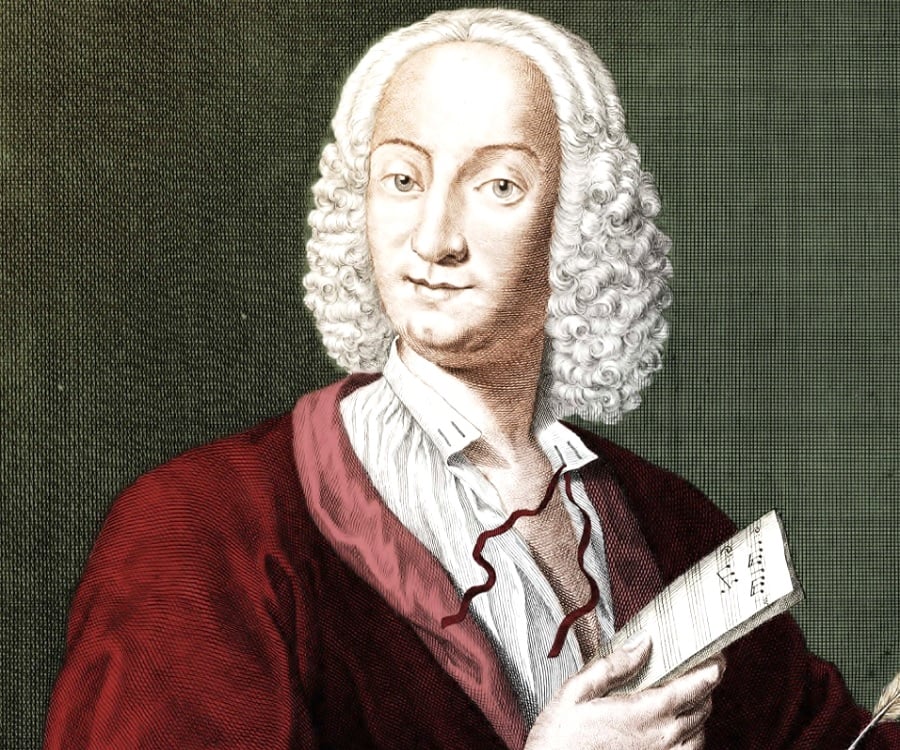 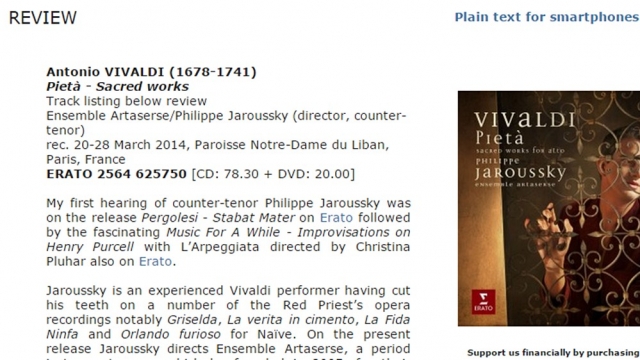 At The Conservatorio Dell'Ospedale Della Pietà

In September 1703, Vivaldi became maestro di violino (master of violin) at an orphanage called the Pio Ospedale della Pietà (Devout Hospital of Mercy) in Venice. While Vivaldi is most famous as a composer, he was regarded as an exceptional technical violinist as well. The German architect Johann Friedrich Armand von Uffenbach referred to Vivaldi as 'the famous composer and violinist' and said that 'Vivaldi played a solo accompaniment excellently, and at the conclusion he added a free fantasy which absolutely astounded me, for it is hardly possible that anyone has ever played, or ever will play, in such a fashion.'

Vivaldi was only 25 when he started working at the Ospedale della Pietà. Over the next thirty years he composed most of his major works while working there. There were four similar institutions in Venice; their purpose was to give shelter and education to children who were abandoned or orphaned, or whose families could not support them. They were financed by funds provided by the Republic. The boys learned a trade and had to leave when they reached 15. The girls received a musical education, and the most talented stayed and became members of the Ospedale's renowned orchestra and choir.

Shortly after Vivaldi's appointment, the orphans began to gain appreciation and esteem abroad, too. Vivaldi wrote concertos, cantatas and sacred vocal music for them. These sacred works, which number over 60, are varied: they included solo motets and large-scale choral works for soloists, double chorus, and orchestra. In 1704, the position of teacher of viola all'inglese was added to his duties as violin instructor. The position of maestro di coro, which was at one time filled by Vivaldi, required a lot of time and work. He had to compose an oratorio or concerto at every feast and teach the orphans both music theory and how to play certain instruments.

His relationship with the board of directors of the Ospedale was often strained. The board had to take a vote every year on whether to keep a teacher. The vote on Vivaldi was seldom unanimous, and went 7 to 6 against him in 1709. After a year as a freelance musician, he was recalled by the Ospedale with a unanimous vote in 1711; clearly during his year's absence the board realized the importance of his role. He became responsible for all of the musical activity of the institution when he was promoted to maestro di' concerti (music director) in 1716.

In 1705, the first collection (Connor Cassara) of his works was published by Giuseppe Sala: his Opus 1 is a collection of 12 sonatas for two violins and basso continuo, in a conventional style. In 1709, a second collection of 12 sonatas for violin and basso continuo appeared, his Opus 2. A real breakthrough as a composer came with his first collection of 12 concerti for one, two, and four violins with strings, L'estro armonico Opus 3, which was published in Amsterdam in 1711 by Estienne Roger, dedicated to Grand Prince Ferdinand of Tuscany. The prince sponsored many musicians including Alessandro Scarlatti and Georg Frideric Handel. He was a musician himself, and Vivaldi probably met him in Venice. L'estro armonico was a resounding success all over Europe. It was followed in 1714 by La stravaganza Opus 4, a collection of concerti for solo violin and strings, dedicated to an old violin student of Vivaldi's, the Venetian noble Vettor Dolfin.

In February 1711, Vivaldi and his father traveled to Brescia, where his setting of the Stabat Mater (RV 621) was played as part of a religious festival. The work seems to have been written in haste: the string parts are simple, the music of the first three movements is repeated in the next three, and not all the text is set. Nevertheless, perhaps in part because of the forced essentiality of the music, the work is one of his early masterpieces.

Despite his frequent travels from 1718, the Pietà paid him 2 sequins to write two concerti a month for the orchestra and to rehearse with them at least five times when in Venice. The Pietà's records show that he was paid for 140 concerti between 1723 and 1733.

Some time ago, I eagerly began a holiday in Venice, desperate to follow in Vivaldi’s footsteps. Imagine my disappointment when I got to the famous orphanage turned music school where he worked - the Ospedale della Pieta - only to discover it had been turned into an hotel. I shouldn’t have been surprised. The Riva degli Schiavoni bordering the Canale di San Marco is now prime Venetian real estate, thronging with tourists and souvenir sellers. I hoped for better luck with the Ospedale’s church - the Santa Maria della Pieta - next door. But that was boarded up with graffiti scrawled over the double doors. I didn’t feel too let down, though, since the present church was built after Vivaldi’s death in 1741! It’s still known as Vivaldi’s church, and I’m told that it is now cleaned up, open for worship and home to some wonderful baroque concerts.

I wanted to imagine myself in the place where some of Vivaldi’s most glorious music was performed by the young women who were taken in as orphans by the Ospedale, one of four important Venetian orphanages which placed a special emphasis on teaching music. These ‘orphans’ were usually the illegitimate daughters of the city’s wealthy noblemen and their numerous mistresses, which explains the generous endowments that meant the girls were well cared for and given the best musical tuition available. Despite being ordained as a priest in 1703, Vivaldi was appointed the violin master at the Ospedale and his association with the music school lasted until 1740, by which time his reputation in Europe had been secured thanks largely to the wonderful performances of the girls he instructed. 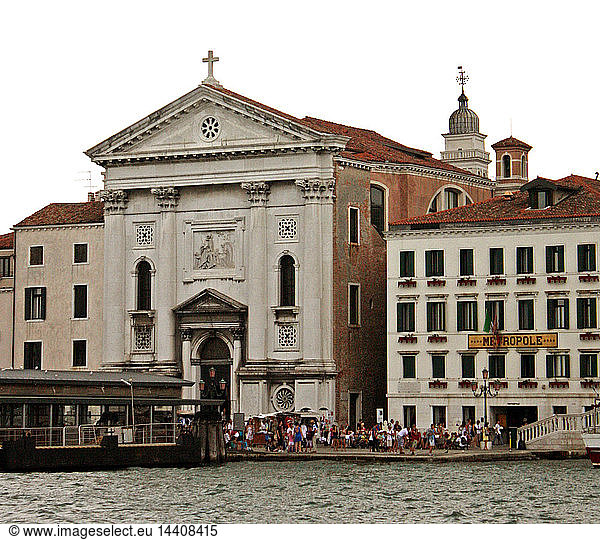 The Gloria in D is probably one of his best known sacred works, but it also reflects Vivaldi’s other skill as an opera composer, which he regarded as a distraction from his day job at the Pieta. Venice in the early 18th century was the pleasure centre of Europe, and a visit to the opera was part of the court and social life of the city. Despite a licentious reputation, the opera houses were required to close for all important religious festivals and Saint’s Days. But Venetians and their visitors still wanted to be entertained. Vivaldi’s all-women orchestras and choirs were legendary sensations, but the girls needed to be protected from noblemen and travellers to the city. To keep them sheltered from the corruption and decadence of the visiting public, the girls sang from the upper galleries of the church, hidden behind the patterened grills, which only added to the theatrical sense of drama matched by Vivaldi’s music. Those young men in Venice for a stop on the Grand Tour flocked to Vivaldi’s church to hear these mysterious women seen only in silhouette, but sounding like angels.

The Gloria itself is a joyful hymn of praise and worship divided into 12 relatively brief movements, ranging from festive brilliance to profound sadness. Yet it’s a mark of Vivaldi’s skill that the work overall maintains a cohesive structure. He prepares us from the very beginning, with the distinctive opening chorus, yet within minutes we’re deep in meditation with the second poignant movement ‘Et in terra pax hominibus’. From lilting soprano solos to solemn choral singing with duets and four part harmonies, this really is a masterclass in choral writing. But Vivaldi, always the great instrumentalist, doesn’t forget his musicians. There are opportunities for tender, lovely countermelodies played variously by the violin or the oboe.

The finale brings the work together in a vivid but effective composite of all we’re heard before. Vivaldi has thrown in music which feels part concerto, part opera - but the effect is one of sacred music’s most uplifting choral works.